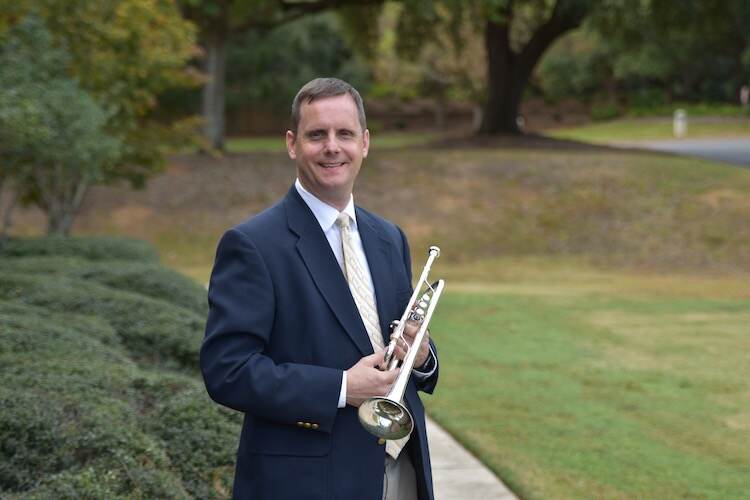 Loyola welcomes guest artists Dr. Peter Wood, trumpet, and Dr. Doreen Lee, piano. Dr. Wood will give a Trumpet Masterclass from 2:30-3:20pm in room 240, and the duo will perform a program of contemporary recital music for trumpet and piano by composers James Stephenson, Brendan Collins, and Michael Daugherty at 7:30pm in Roussel.

Dr. Peter Wood is Professor of Music at the University of South Alabama in Mobile, where he teaches trumpet, brass pedagogy, and brass literature; coaches brass chamber music ensembles; and conducts the trumpet ensemble. A two-time teaching award winner at USA, he also serves as Publications Editor for the International Trumpet Guild and is a member of the ITG Board of Directors.

Wood has taught and performed on four continents in a wide variety of musical settings. He is a member of the Mobile Symphony Orchestra and has released three CD recordings. He has performed at conferences of the International Trumpet Guild, College Music Society, and Society of Electroacoustic Music in the United States. He has taught master classes and performed solo recitals at colleges and universities all over the US and has performed as soloist at the Nong Festival of Electroacoustic Music in Seoul, South Korea. He is also a faculty member at the International Trumpet Symposium in Ronzo-Chienis, Italy.

Dr. Doreen Lee is Assistant Professor of Collaborative Piano/Piano at the University of South Alabama. Prior to joining the faculty at USA, Doreen served as Adjunct Instructor of Collaborative Piano (Instrumental) at Colorado State University, as well as Lecturer of Collaborative Piano at the University of Colorado Boulder. She has performed with notable artists such as violist Geraldine Walther, Colorado Symphony Orchestra Principal Horn Michael Thornton, flutist Christina Jennings, and cellist Johannes Moser, among others. She has been featured as one of pianists for the Mobile Symphony Orchestra’s concert cycle of Saint-Saëns’ Carnival of the Animals.  Doreen performed as guest faculty for the Orvieto Musica festival hosted in Orvieto, Italy in 2021 and 2022. Doreen is also the pianist of the du Toit/Lee Duo, formed in collaboration with flutist Cobus du Toit. The duo made their international debut in the summer of 2019 at the Australian Flute Festival, hosted at the Sydney Conservatory of Music. In addition to her national and international performances, Doreen is also featured on Jacques Castérède’s Complete Flute Works, a three CD set released by Naxos Records in 2019 and 2020.