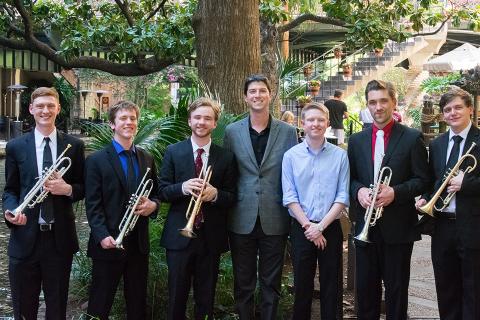 The Loyola University Trumpet Ensemble performed at the 43rd annual conference of the International Trumpet Guild in San Antonio, Texas. The group, under the direction of Dr. Nick Volz, was chosen by recorded audition to be among a handful of trumpet ensembles from around the world to perform at the conference.

The ITG is the largest organization for trumpet players in the world, and the invitation to represent New Orleans and to perform before thousands of trumpet players was a distinct honor of which the Loyola students are very proud. The organization is a nonprofit founded in 1974 to promote communications among trumpet players, and it aims to improve the artistic level of performance, teaching, and literature associated with the trumpet.

A review of the Loyola ensemble stated, "the performance exhibited tremendous enthusiasm, power, and excitement throughout." The group includes Michael Bauer, Chris Drennan, Brian Maassen, Peter Nionakis, and Jack Wright. In addition to giving a feature performance for an international audience, they had the opportunity to interact with many of the world's leading trumpet artists and scholars.

The organization holds a competition each year to award conference scholarships and cash prizes to exceptional students by judging submitted solo recordings. Brian Maassen received the Stuart Shanler Jazz Performance scholarship award. Maassen, a sophomore majoring in Music Education with a Jazz Studies Minor from Mandeville, Louisiana, received his award at the annual banquet and will be acknowledged in the next ITG Journal.