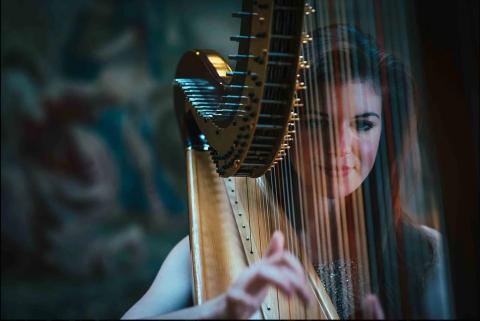 An American harpist who lives in Ayrshire has produced a heartfelt musical tribute to an Ayrshire estate saved for the nation by The Prince of Wales and will launch the 12-track album at a special live performance in July.

Meredith McCrindle, Loyola Class of 2008, has spent three years developing a “musical tour” of Dumfries House and will perform her original works, each of which is dedicated to a particular room within the Palladian country house near Cumnock, at the debut airing of When Walls Speak on July 29.

“If the rich history of the house was made into a movie, this would be the soundtrack,” explained Meredith, who lives in Ayr with her Scottish husband and their twin boys. “The music is more than just harp ‒ it’s a modern expression of an iconic home, a musical tour that brings the people, rooms and history to life.

“Dumfries House inspires me. The architecture and furnishings fascinate me, but it’s the history and the future vision of the House that truly moves me. The project encourages everyone to be a part of a greater future story, that’s the true beauty and inspiration of Dumfries House.”

“The music explores both rooms on and off of tour and reveals some mysteries in the house, too. Dumfries House has been amazing to me, I have had many opportunities to play for weddings and VIP events and I am especially honored to have played on a few occasions at dinners with The Prince himself. For a girl from Texas, playing in a grand manor to The Prince is a big deal. To have that kind of accolade is huge, I’m so proud to say I’m resident harpist at Dumfries House.”

The Prince of Wales was part of a consortium who purchased Dumfries House estate in 2007 and now ensures it is used to help people engage in learning experiences that promote confidence and personal development as well as offer training in real-life skills to open up future employment opportunities.

Meredith’s concert will begin with the Order of the Thistle, the music used as the background for the segment featuring Dumfries House in the BBC documentary When Ant and Dec Met The Prince: 40th Years of The Prince’s Trust.

“The story behind the Order of the Thistle is that it is an entrance piece ‒ big chords, big arpeggios, fast-paced ‒ and you get a sense of the aristocratic Lord coming home,” said Meredith. “In contrast, you have the Blue Bedroom ‒ a very interesting room to me, very feminine ‒ the history of that room is much more solemn, you can hear the whispers of the generations of women who have occupied that room. Then, there’s the mystery that surrounds the dancing tune in Yellow Drawing Room, very curious. The house is full of emotion and of resonance.”

The recital includes Baroque-era pieces written for Dumfries House and nine original compositions dedicated to the history of the family and their home. The concert will feature special guests, including Ayrshire Infinity Choir director Siobhan McAuley.