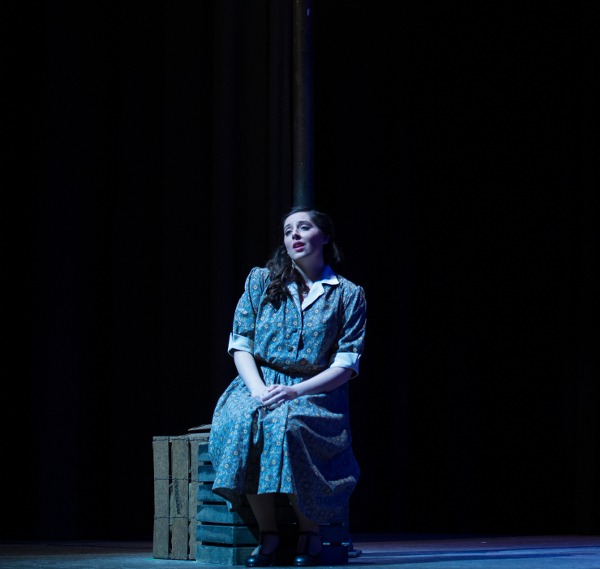 Act One
In suffocating heat, tenement dwellers of many nationalities gather to chat on the stoop in a poor neighborhood on New York’s Lower East Side. Henry Davis, the janitor, sings as he tends to his duties. Grumbles about the heat give way to gossip about the affair between a tenant, Mrs. Maurrant, and Steve Sankey, the milk collector. Mrs. Maurrant herself joins the group just before Sam Kaplan, a studious boy in love with Mrs. Maurrant’s daughter, Rose, pauses on his way to the library. Daniel Buchanan laments the pressures of upcoming fatherhood until summoned by his wife’s cries, all to the women’s amusement. Mr. Maurrant, home from his work as a stagehand, reveals a domineering, inflexible attitude toward his gentle wife. As he goes up into their apartment, Mrs. Maurrant gives an impassioned expression of her longing for happiness, filled with desperate optimism. Sankey passes by, and Mrs. Maurrant slips away under the pretext of looking for her son. The gossips draw their own conclusions, wondering what would happen if Mr. Maurrant were to find out.

Lippo Fiorentino, a gregarious Italian musician, arrives bearing ice cream cones for everyone, sparking praise for the American institution of the ice cream parlor. Afterward, Maurrant seems to accept his wife’s explanation of her brief absence, but his smoldering anger flares up in a political argument with Abraham Kaplan, Sam’s “radical-thinking” father. The argument started with a disagreement about parenting, and Maurrant’s credo, “Let things be like they always was,” again betrays his unyielding nature. A group of recent school graduates enter, with focus on the achievements of Jenny Hildebrand. Aided by her brother Charlie and sister Mary, she describes the ceremony and is warmly congratulated by all the neighbors. Sadly, the family is scheduled to be evicted the very next day for not paying the rent. To cheer them up, Lippo proposes a dance and is joined by Mrs. Maurrant, who stops in confusion when Sankey comes by. Maurrant berates his wife and then his son, Willie, who has again gotten into a fight with local bully Joe Connolly.

After the Maurrants exit, tongues again start wagging. Sam explodes at their cruelty. Left alone, Sam sings “Lonely house, lonely me!” and eventually retires himself. Rose enters with Harry Easter, trying to keep at bay the attentions of her office colleague. Easter tells Rose she could have the chance to be a Broadway actress and live a life of luxury if she decides to be his mistress. Rose, a romantic like her mother, rejects the promises of material wealth, hoping instead for true love in her life, and Easter leaves. Interrupted by Buchanan, Rose offers her own and her mother’s assistance and runs for the doctor. Mae Jones and Dick McGann flirt, get drunk, dance, and eventually stagger off. When Rose returns, she is subjected to the sexual advances of Vincent Jones. Sam tries to rescue her, but is knocked down by Vincent, who leaves. Rose attempts to bolster Sam’s confidence, recognizing his superior qualities despite his lack of physical prowess. Rose and Sam confide in each other, and share a favorite poem. They both want to escape their depressing surroundings. Rose tells Sam she will always care for and believe in him. They exchange a kiss and then bid each other an affectionate good-night.

The following morning the street and tenement building wake up. People start to go about their business and children emerge to play a taunting game that escalates into a fight. Buchanan expresses gratitude that Mrs. Maurrant stayed all night during the birth of his new baby girl. Before Maurrant leaves for work, Rose asks if he could just be a little nicer to her mother. Maurrant rejects Rose’s suggestion and attacks his wife for being gone all night, refusing her explanation about helping the new mother. A bitter quarrel ensues before Maurrant, half-drunk, leaves. Mrs. Maurrant, at a new low point, shares with Rose that she has tried to be a good wife and mother, but her husband never seemed to care, and she might as well be dead. Willie emerges, disheveled, and Rose tries to attend to clean him up, to no avail. Mrs. Maurrant is more successful with her affectionate tact.

Sam appears, and is appalled when Rose tells him about Easter’s offer. Instead he proposes going away together. Rose agrees, and they sing of an idyllic future until Easter reappears to accompany Rose to their boss’s funeral. Sankey comes by, and Mrs. Maurrant invites him to join her upstairs. A violin student arrives for her lesson with Lippo. City officials show up to evict the Hildebrands. Maurrant then unexpectedly returns. Sam, horrified, tries to prevent him from entering the house, but fails. Screams and then shots are heard. The police quickly arrive on the scene, but when Maurrant runs out, having killed Sankey and wounded his wife, he evades them. The ambulance arrives and Rose pieces together the awful truth of the situation. While the crowd murmurs in shocked excitement, Mrs. Maurrant is carried out, and the ambulance leaves.

Several hours later two nursemaids with baby carriages stop, stare and comment until chased away by a policeman. Sam and his sister Shirley comfort Rose as best they can. More shots ring out, and Maurrant is caught. When he is led in by the police, Rose insists on speaking to him. Maurrant tries to explain that, despite how things look, he really loved his wife but was driven mad by the talk and the prospect of losing her. The crowd mutters sympathetically, leaving Sam and Rose alone. They must face the fact that everything has changed, and that their dreams are a thing of the past. Rose has decided to go away, but just with her brother Willie. Sam is heartbroken. As evening settles in, the gossip and grumbles of the tenement begin all over again. Nothing seems to have changed.