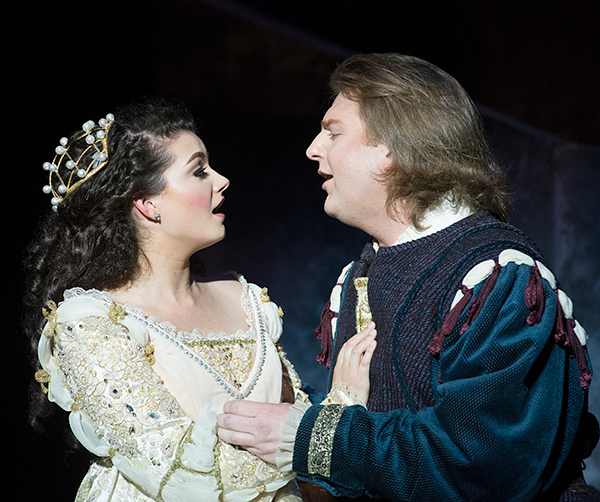 ACT I – Palace of the Capulets
The Capulets are holding a masked ball. Count Capulet arrives with his daughter and greets the guests. Juliette is excited to attend the party (Je veux vivre). The rival Montagues, including a masked Roméo and his friends, also arrive at the party. Roméo’s friend Mercutio launches into a song about Queen Mab trying to convince Roméo to stay focused on the task at hand. It is then that the two meet and their attraction is instantaneous. Tybalt is suspicious of the young man attracting Juliette’s attention and realizes that Montagues are at the ball. Roméo and his friends make a quick exit. Count Capulet tells Tybalt to remain civil and continues the ball.
ACT II – Juliette’s Garden
Roméo is hiding just below Juliette’s balcony. Roméo sings of Juliette’s beauty as the purest, brightest star (Ah! lève-toi, soleil!). As Roméo hides, Juliette appears and speaks of her attraction to him, even though he is a Montague. Roméo reveals himself and they pledge their love, only to be interrupted by Capulet men searching the gardens and by Juliette’s nurse, Gertrude. They bid each other good night.
ACT III, Scene 1 – Frère Laurent’s Cell
Roméo, followed by Juliette and her nurse, arrives at Frère Laurent’s cell. The Friar hopes that the union of Roméo and Juliette will lead to peace between the two houses and agrees to marry the couple.
ACT III, Scene 2 – A Street Near the Capulet’s House
Stéphano provokes a fight with the Capulets (Que fais-tu, blanche tourterelle?) as a distraction. Grégorio rises to the challenge, drawing more Capulets and Montagues into the brawl. Mercutio and Tybalt fight and Mercutio is killed. In a fit of rage, Roméo kills Tybalt. The Duke of Verona banishes Roméo from the city.
ACT IV – Juliette’s Bed Chamber at Dawn
After a night of passion, Roméo bids Juliette farewell before he is exiled (Nuit d’hyménée! O douce nuit d’amour!). Gertrude warns Juliette that her father is approaching with Frère Laurent. Count Capulet tells Juliette to prepare for her marriage to Pâris. The Friar gives Juliette a potion that will make it appear as if she is
dead, then promises that when she awakens, Roméo will be with her and they will flee together. Juliette drinks the potion and, before the assembled wedding guests, she faints. All believe her to be dead.
ACT V – The Tomb of the Capulets
Roméo has broken into the tomb and mourns Juliette’s death. In despair, Roméo drinks poison just as Juliette begins to awaken. Unaware that Roméo is dying, they sing of a new life together but Roméo falters and tells Juliette what he has done. Unwilling to live without him, Juliette stabs herself with a dagger. As the lovers die, they pray for God’s forgiveness.