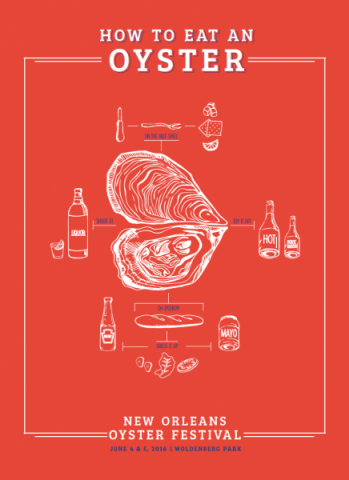 A 2016 Loyola University New Orleans graduate caps off her four years in college with a special win. Abbey Furlow of Omaha created the poster selected to represent the 2016 New Orleans Oyster Festival, which took place June 4-5 in Woldenberg Park along the New Orleans Riverfront.

Her winning design, selected in a citywide contest, will be sold at the summer festival celebrating the city’s oyster culture, restauranteurs and oyster farmers. A portion of the proceeds will help to restore Louisiana Gulf Oyster beds damaged during the Deepwater Horizon oil spill.

“The New Orleans Oyster Festival celebrates oyster culture, the restaurateurs, and the oyster farmers. Research led me to find that raw oysters were highlighted on every poster since the festival’s beginning. I wanted my poster design to take a different direction. I felt it was important to encompass several components of the oyster eating culture such as: fried oysters, hot sauce, crackers, the oyster knife, and other elements,” Furlow said.

“Focusing on the oyster culture was the driving force behind my concept, but my design was also strongly influenced by vintage botanical and anatomy charts. I thought it was clever to title the poster “How to Eat an Oyster” because well, you just eat them … but they can be consumed in various ways. I selected a bold color to showcase my illustrations and smaller type playfully explains the visuals.”

Furlow’s winning design brought her four VIP passes to the festival, including tickets for complimentary beverages and food prepared by some of the region’s most celebrated restaurants. She is “honored that her poster was selected and will be showcased at the festival.

Led by Design Department chair and professor of design Daniela Marx, Loyola’s one-year-old Bachelor of Design degree program is the only university ign program in New Orleans. Marx believes that students should learn traditional skills the New Orleans wants and needs for its aesthetic to stand apart from other cities. At the same time, she’s training artists of the 21st century. In the close-knit four-year degree program, Loyola design students learn traditional skills such as calligraphy, hand-lettering, textile design and sign painting alongside design build, animation, app design and other skills needed to develop creative design solutions.

Winning the contest was “a great surprise and a wonderful way to leave my design mark on New Orleans,” said Furlow, who graduated from Loyola on Saturday, May 21 with one of the first Bachelor of Design degrees bestowed by the university.