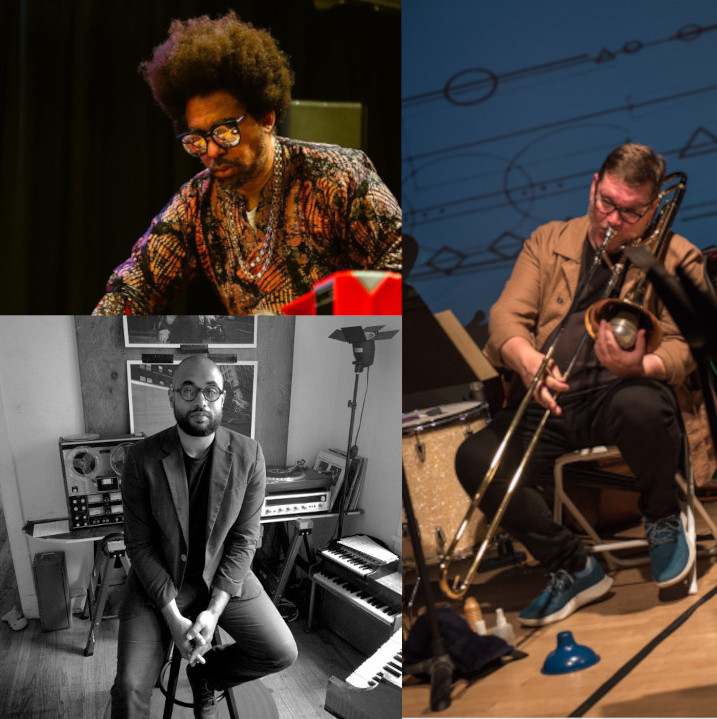 A concert of improvised music presented in conjunction with the Instigation Festival, supported by the RosaMary Foundation Endowed Professorship in Music. Featuring the trio of Damon Locks (voice and electronics), Mikel Patrick Avery (percussion, electronics, and surprises) and Jeff Albert (trombone and laptop).

Damon Locks is a Chicago-based visual artist, educator, vocalist/musician. He attended the Art Institute of Chicago where he received his BFA in fine arts. Since 2014 he has been working with the Prisons and Neighborhood Arts Project at Stateville Correctional Center teaching art. He is a recipient of the Helen Coburn Meier and Tim Meier Achievement Award in the Arts and the 2016 MAKER Grant. He operated as an Artist Mentor in the Chicago Artist Coalition program FIELD/WORK. In 2017 he became a Soros Justice Media Fellow. In 2019, he became a 3 Arts Awardee. He recently completed 4 years as an artist in residence as a part of the Museum of Contemporary Arts’ SPACE Program, introducing civically engaged art into the curriculum at Sarah E. Goode STEM Academy High School. In the spring of 2022, he taught his first semester in the Sound Department on improvisation at The School of the Art Institute of Chicago. Damon leads the Black Monument Ensemble and is a founding member of the band The Eternals. https://damonlocks.black/

Now residing in Philadelphia, multidisciplinary artist Mikel Patrick Avery had been actively working out of Chicago and then New Orleans for the past 16 years. Established as a jazz drummer, he is commonly recognized for his orchestral and melodic style of drumming that often involves the use of unconventional "non-musical" objects. Adjacent to being a performing musician, Avery is a dedicated filmmaker, composer, photographer, designer, and educator, whose body of work invariably draws upon the ideas of ‘unstructured-play’ commonly applied to learning environments found in early education.

Jeff Albert is a musician, music technologist, and educator. He is the RosaMary Foundation Distinguished Professor of Music at Loyola University New Orleans. Jeff wrote the horn parts and played trombone on Bobby Rush’s album Porcupine Meat, which won the 2017 Grammy for Best Traditional Blues Album, and was the horn arranger and trombonist for The Meters from 2015 until their final performance in 2017. Albert performed on Pretty Lights Grammy Nominated 2013 album Color Map of The Sun. In 2013, the Paris based record label Rogue Art released his CD, The Tree on the Mound, which features Kidd Jordan, Hamid Drake, and Joshua Abrams. In addition to leading his band Unanimous Sources, Jeff is a member of Hamid Drake’s Bindu-Reggaeology band, and co-led the Lucky 7s with fellow trombonist Jeb Bishop. In addition to his work with world renowned improvisers, he has been a member of the bands of New Orleans greats George Porter and Wardell Querzergue, backed artists like Stevie Wonder and Bonnie Raitt, and performed with the Louisiana Philharmonic Orchestra, and the New Orleans Opera. https://jeffalbert.com/

The Instigation Festival brings Chicago & New Orleans music, movement and visual artists together for a week of improvised and interesting interdisciplinary collaboration in each city. Since its’ founding in 2016 by guitarist Steve Marquette and movement artist Marie Casimir, they have presented over seventy artists at twenty venues across seven festivals. Now entering its’ seventh year, the Instigation Festival continues its work of fostering connections between these cities’ creative arts communities, while expanding the scope to include European performers. https://www.instigationfestival.com/

7:30 pm on Tuesday, January 31, 2023 in Nunemaker Auditorium at loyola University New Orleans. Open to the public.