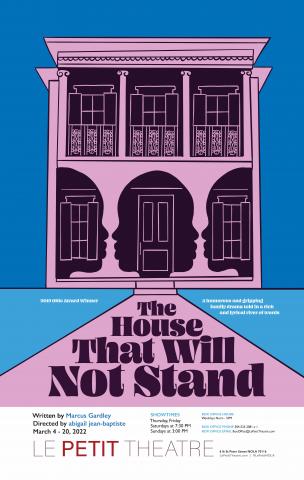 We are proud to announce that two of our TAD students, Eden James and Elexis Selmon, will be appearing in Le Petit Theatre’s The House that Will Not Stand  by Marcus Gardley, coming this March. This production will be one of the hundreds that have been staged in this historic and influential playhouse. The House that Will Not Stand opens on March 4; student tickets cost $15.

Sensuous, witty, heartbreaking, and uplifting, the 2019 Obie Award winning, The House That Will Not Stand by Marcus Gardley unearths a story about free women of color in 1836 New Orleans, where Black Creole women entered into common-law marriages with rich white men. But the house that Beartrice built—on a foundation of wealth, freedom, and secrets—threatens to collapse after her man mysteriously dies and her three unwed daughters realize that his money could cost them the people they love. The House That Will Not Stand is a humorous and gripping family drama told in a rich and lyrical river of words.

Congratulations, Eden and Elexis! We are so proud of you.

Also, save the date for Le Petit's next installment in the "Look Mama! It's a Dream!" reading series FREE to the public. Antoinette Nwando's Pass Over is a Beckettian look into the day in the lives of Moss and Kitch, two young Black men on a street corner in Chicago.