Professor and Alum work together to produce ALEXIS, I AM! 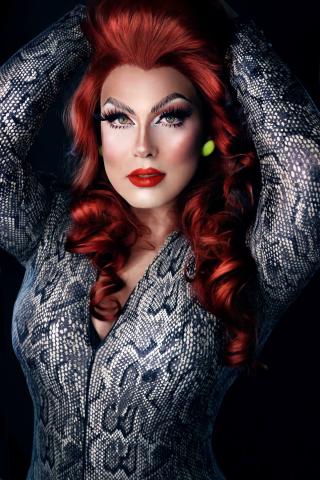 Professor C. Patrick Gendusa and alum James Will McBride ('12) came together to produce a one night only performance of Alexis, I Am! starring the famous queen, Alexis Michelle, of "RuPaul's Drag" Race Season 9. It featured music direction by Brandon James Gwinn and was written and directed by James Will McBride. The simple meditation “Breathe in… I. Breathe out… Am.” has seen Alexis Michelle through the most exciting and challenging year of her career. From the exhilaration of being thrust into the reality tv spotlight to the struggles of the social media age, Alexis has lived it all and is stronger for it. Joining her onstage was celebrated New Orleans singer Anais St. John, a sultry songstress and a seasoned performer at jazz, opera and musical theater, as a special guest for this engagement.The night contained a repertoire of songs made famous by divas like Liza, Judy, and Gaga as well as some of her own signature tunes, including “Thank You for Being a Friend.” In her performance, Alexis shared the experiences that have challenged her and made her brave enough to say “ALEXIS, I AM!”

James Will McBride has conceived and produced concerts and cabaret at Feinstein's/54 Below in New York City as well as venues in Houston, New Orleans, DC and Hartford. His theatrical directing credits include Tauris, War Prayer, The Little Ghost, and The Retreating World. He served as resident assistant director at Hartford Stage for two seasons and is a former Directing Candidate in The American Theatre Wing's SpringBoard NYC program. He's assisted directors including Darko Tresnjak, Kent Thompson, Mark Lamos, Michael Wilson, and Giovanna Sardelli. He directed the NYC premiere of Naomi Wallace's The War Boys. He recently directed Informed Consent at Loyola University New Orleans. For more visit JamesWillMcBride.com.

C. Patrick Gendusa has worked professionally as a performer, director, and instructor in New York, Texas, New Mexico, Virginia, and Louisiana. He received a BA in Theatre Arts from St. Edwards University and his MFA in Acting and Directing from Texas Tech University. Currently, he is an Assistant Professor of Theatre at Loyola University New Orleans. Patrick was chosen as one of only fourteen theatre professionals to participate in the prestigious The Actors Center Teacher Development Program in New York City. He has taught theatre at the University of Richmond and Texas Tech University. He was head of the Department of Theatre at Holy Cross School. While in Austin, Texas he was vice-president of the Zilker Summer Musical, the only free outdoor theatre remaining in the country. He also toured with and was a founding member of the Second Youth Theatre Company and the Kinesis Dance Theatre Company. In New York he had a cabaret act called Chemistry where he taught musical theatre and acting. He has twice received a Big Easy Award for Best University Production: in 2011 for Godspell and 2018 for The Christians. Patrick is a proud member of the Screen Actors Guild and the American Federation of Television and Radio Artists.