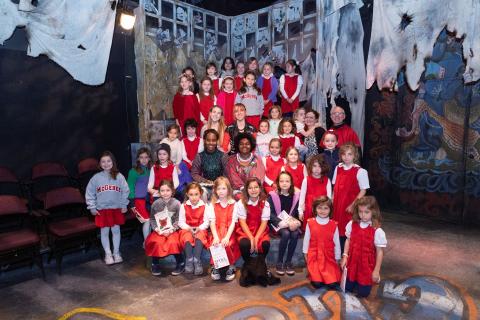 On November 13th, the patter of dozens of little feet could be heard entering the lobby of the Lower Depths Theater. Hand in hand, over thirty 2nd grade girls from the Louise S. McGehee School came out to watch scenes from Loyola’s production of Romeo and Juliet. This semester, the McGehee girls, including the daughter of Loyola President Tania Tetlow, have been studying the play and learning about Shakespeare. Since theatre is meant to be seen and not just read, it was a happy coincidence that Loyola had been producing the show at the same time. Upon seeing it, President Tetlow knew it would be a wonderful learning experience for the students to see it on stage. Not only that, but McGehee is an all-girls school and this production was presented with an all-female cast. What better way to promote women pursuing their dreams than to take a group of young women to see women doing what they love on stage!

The students were presented with snippets of the show, including the balcony scene, Tybalt and Mercutio’s sword fight, and Romeo and Juliet’s farewell before he leaves for Mantua. Afterward, Nicole Miller (Romeo), Jennifer Lepore (Juliet), Cereyna Bougouneau (Tybalt), and Talia Moore (Mercutio) answered an impressive round of questions from the students. The girls were precocious and excited, eager to ask about the set and costumes, how the actresses learn their lines, and if the swords were actually real swords. A few were concerned about whether the actresses had actually been hurt by them, but they were quickly reassured that such things were staged. In particular, they were enamored with the set, asking over and over about the graffiti, the tattered fabric, and the broken glass. The post-apocalyptic world of Loyola’s Romeo and Juliet clearly impressed many of them.

After taking an extensive round of photographs with the actresses, the girls left the theater in awe and smiling from ear to ear.  It was like they had met a group of celebrities. Not only had they gotten the opportunity to see Shakespeare on stage, but they were also able to meet hard-working young women that are pursuing their dreams. It was certainly an inspiring experience for the McGehee girls.