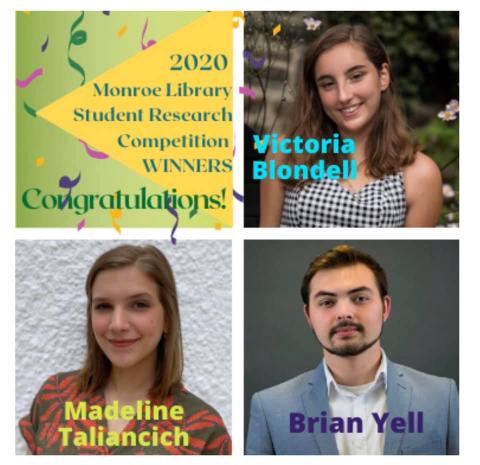 TAD sophomore Madeline Taliancich won the Monroe Library Student Research Competition for her paper entitled “Trouble in Tir-na-n-Og: MacNamara’s Critical Presentation of British Colonial Culture in Northern Ireland,” the library announced earlier this month. The research competition “recognizes and rewards students who make exemplary use of the collections, resources, and services of the J. Edgar & Louise S. Monroe Library throughout the research process in order to produce an academic or creative work,” according to the Monroe Library website.

Taliancich was among three winners recognized for their achievement in writing papers that exemplified use of the library’s research resources. “I was really surprised to find out that I had won,” said Taliancich. “With everything going on and school moving online, I figured picking winners was the last thing on everyone’s mind.”

Taliancich wrote her winning paper for Dr. Laura Hope’s “Irish Nationalism and Theatre” class in the fall of 2019. The course examined the history of Ireland and its oppression through a theatrical lens with a focus on how the British and the Irish have different perspectives on life, culture, and nationalism.

The assignment was to write a paper on a play that examined the themes of the class. “I picked a really obscure play,” said Taliancich. “Thompson in Tir-na-n-Og was mentioned very briefly in one of our readings in the semester. I had to get the physical play on loan from the University of Notre Dame just to read it.”

The library described her paper as “an ambivalent critique of essentialist Irish nationalism as a mutable ideological construct.”