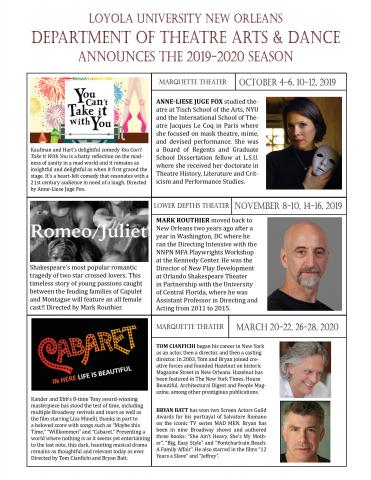 Loyola University Department of Theatre Arts and Dance
Announces the 2019-2020 Season of Acceptance
The Loyola University Department of Theatre Arts and Dance presents a season theme of acceptance with an invigorating line-up that challenges us through music, laughter, and personal reflection.  It is with excitement and anticipation that we bring to the 2019-2020 Loyola University stage a season that provokes, intrigues, and entertains audiences as it explores the complexities and ways that we are each touched by another.
You Can’t Take it with You
By George S. Kaufman and Moss Hart
Directed by Anne-Liese Juge Fox
Marquette Theatre
October 4, 5, 10, 11, 12 @ 7:30 p.m.
October 6 @ 2:00 p.m.
Kaufman and Hart’s delightful comedy You Can’t Take it with You is a batty reflection on the madness of sanity in a mad world, and it remains as insightful and delightful as when it first graced the stage.  It’s a heartfelt comedy about being yourself that resonates with a 21st century audience in need of a laugh.
Tony, attractive young son of the unhappily affluent Kirbys, falls in love with Alice Sycamore and brings his parents to dine at the joyous quirky home of the Sycamores, on the wrong evening. In a house where you do as you like, no questions asked - they encounter the open circle of Sycamore family and friends - novel novelist, devoted dancer, ballet master, ex-Grand Duchess waitress, amateur printer, tax evaders, society shirkers, and free thinkers and the evening explodes into hysterical, and all too real, fireworks.
Director Anne-Liese Juge Fox studied theatre at Tisch School of the Arts, NYU, and the International School of Theatre Jacques Le Coq in Paris where she focused on mask theatre, mime, and devised performance.  She was a Board of Regents and Graduate School Dissertation fellow at LSU where she received her doctorate in Theatre History, Literature and Criticism, and Performance Studies.
Romeo and Juliet
By William Shakespeare
Directed by Mark Routhier
Lower Depths Theatre
November 8, 9, 14, 15, 16 @ 7:30 p.m.
November 10 @ 2:00 p.m.
Romeo and Juliet is known as Shakespeare’s most popular romantic tragedy of two star-crossed lovers.  This timeless story of young passions caught between the feuding families of Capulet and Montague will feature an all female cast!  Director Mark Routhier moved back to New Orleans two years ago after a year in Washington, D.C. where he ran the Directing Intensive with the NNPN MFA Playwrights Workshop at the Kennedy Center.  He was the Director of New Play Development at Orlando Shakespeare Theater in Partnership with the University of Central Florida, where he was Assistant Professor in Directing and Acting from 2011 to 2015. He is presently the Director of New Play Development with The NOLA Project, where he also serves as the company liaison to the Executive Board. Mark is a Big Easy Award winner, an at-large Ambassador for the National New Play Network and Adjunct Professor at Loyola University New Orleans.
Cabaret
Music by John Kander
Lyrics by Fred Ebb
Book by Joe Masteroff
Directors:  Bryan Batt & Tom Cianfichi
Music Director: Flo E. Presti
Choreographer: Kali Russell
Marquette Theatre
March 20, 21, 26, 27, 28 @ 7:30 p.m.
March 22 @ 2:00 p.m.
Kander and Ebb’s 8-time Tony award-winning masterpiece has stood the test of time, including multiple Broadway revivals and tours as well as the film starring Liza Minnelli, thanks in part to a beloved score with songs such as “Maybe this Time,” “Willkommen,” “and “Cabaret.”  Presenting a world where nothing is as it seems, yet entertaining to the last note, this dark, haunting musical drama remains as thoughtful and relevant today as ever.  Cabaret will be directed by Bryan Batt and Tom Cianfichi.  Bryan has won two Screen Actors Guild Awards for his portrayal of Salvatore Romano on the iconic TV series MAD MEN.  Bryan has been in nine Broadway shows and authored three books: She Ain’t Heavy, She’s My Mother; Big Easy Style; and Pontchartrain Beach: A Family Affair.  He also starred in the films 12 Years a Slave and Jeffrey. Tom began his career in New York as an actor, then a director, and then a casting director.  In 2003, Tom and Bryan joined creative forces and founded Hazelnut on historic Magazine Street in New Orleans.  Hazelnut has been featured in The New York Times, House Beautiful, Architectural Digest, and People Magazine, among other prestigious publications.
Main Season Tickets: Tickets available online at http://cmm.loyno.edu/theatre/events
Tickets: $15 General Admission,
$12 Senior Citizens,
$10 Students, Loyola Faculty and Staff, and Children
Group Rates Available for all Productions
Call 865-2074 for Ticket Information
Department of Theatre Arts and Dance, 865-3840