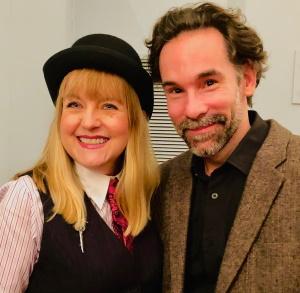 "Whenever and wherever Duda and his fellow Poles experience Virtuoso, 3 Paderewskis, or Memory Laws, none of them will be wondering, “Ignacy who?” Nor would you be had you lived in the U.S. approximately a century ago, when the Paderewski name would have been as recognizable to you as that of Presley, Pavarotti, or the Artist Formerly Known as Prince. Indeed, for his time Paderewski had much in common with chart-topping songsters like these: He was a classical-music prodigy whose celebrity outshone and outclassed all competition."

"More than 100 American artists of every stripe have immersed themselves in the venture thus far. Initial concert presentations of first-act excerpts from multiple shows got the ball rolling in late 2017 on both coasts, in showcase evenings at New York’s Public Theater and at USC’s Cammilleri Hall. In late 2018, Olendzki, Klass, several Polish observers, and a team of evaluators (this writer included) traveled as a group to four U.S. cities—New Orleans, Los Angeles, Albuquerque, N.M., and New York City—to witness in-progress stagings of the seven musicals selected for fuller development.

A rundown of the tour illuminates the variety of narrative riches embedded in the Paderewski canvas:

Writer Jendrzejwski characterized her Memory Laws, elegantly staged by director Emily Mendelsohn at Albuquerque’s Tricklock Company, as “an album, a constellation, a collage of vignettes” evoking Paderewski’s life, though the man himself appears only in film images. A cast of three women in white reinforce the piece’s female-centered approach. Next stops: a return to Tricklock, Aug. 25; “ItSelf” in Warsaw, Oct. 8.

Not one but three incarnations of Paderewski (racial or gender specificity not required) was the out-of-the-box trope that made the Brandon-Mayer collaboration Three Paderewskis. This set-free chamber opera for nine singers was staged with effective simplicity on the USC campus by Jon Lawrence Rivera. Next stops: a return to Los Angeles, Oct. 12; Kennedy Center gala premiere, Nov. 20.

The later California-based years of Paderewski and spouse are surveyed in Golden, a musically rich tale (score by Nathan Wang, book and lyrics by Paula Cizmar) that veers disconcertingly into issues of American racial violence. Diana Wyenn helmed the staging at USC. Next stop for Wang (best known for his soundtracks for films of Steven Spielberg and Jackie Chan): a residency at Huntington Gardens in Pasadena, Calif., which holds a major collection of letters from Paderewski’s close friend and mentor, the great Shakespearean actor Modjeska. A production in China, aimed at Wang’s enthusiastic Asian fan base, is also under discussion.

Director and book writer Mark Seldis, lyricist and co-writer Katharine Noon, and composer David O are the creative team for Paderewski in America, which throws its hero into an unlikely but evocative conversation with the madam of a St. Louis brothel. Also presented at the Geffen.

Blacksmith, which takes its title from a critic’s disparaging comment about the pianist’s style, sets Paderewski’s career track to a pounding rock score and lyrics by Zoe Sarnak, whose collaborators included James Fluhr (concept) and Ellie Heyman (director). Shown at Manhattan’s Public Arts Theatre. Next stop: a CD of Sarnak’s Blacksmith."