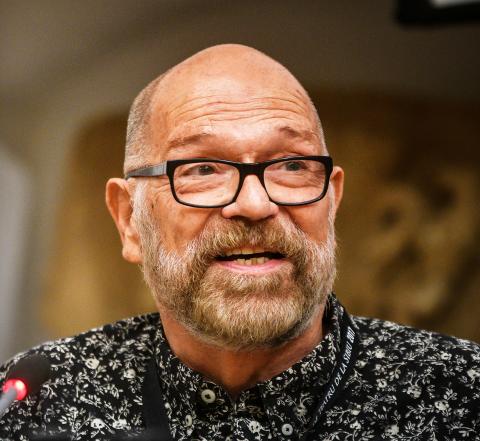 Loyola University New Orleans' American Musical Theatre class will be taught this year by professor Jim O’Quinn. Mr. O’Quinn is the founding editor of American Theatre magazine, the only national general-circulation publication about theatre in the United States, and served as its editor-in-chief for more than thirty years. An adviser to the International Paderewski Musical Project sponsored by the Polish government, O’Quinn also edited the quarterly SDC Journal of the Society of Stage Directors and Choreographers for 8 years.  He also wrote the Encyclopedia Britannica Book of the Year reports on theatre in the U.S. and Canada for nearly a decade.

His articles and reviews have appeared in Theatre Heute, Playbill, High Performance, Tatler, the now-defunct Manhattan weekly 7 Days, and TDR: The Drama Review, for which he served as managing editor in the early 1980s at New York University.

Prior to moving to New York, he was a city-desk reporter for the New Orleans Times Picayune and an award-winning publisher of a small-town Louisiana weekly newspaper. He has also composed, arranged, and directed music for the theatre, and his children’s opera The Littlest Emperor was produced in 1978 at New Orleans’ Contemporary Arts Center. O’Quinn is the recipient of the 2010 Excellence in Editing Award from the Association for Theatre in Higher Education, two Eddie Awards for editorial excellence at American Theatre, and six Louisiana Press Association awards.

O’Quinn is teaching American Musical Theatre in hopes of taking students through our nation’s history in a unique way. “When a country has less than 300 years of history under its belt, and that history tells the kind of wildly dramatic story ours does, the way that history is shared and transformed into a national narrative is crucially important. In its various forms, art serves as a vehicle for human truths, and the valorization in American life of literature, visual art, theatre, etc., has kept us tuned in to democratic aspirations,” said O’Quinn of the importance of art in shaping our country’s historical narrative framework. “The American musical has consistently reflected the country's sociopolitical outlook and well-being, and a few great musicals have made indelible commentary on our progress (or lack thereof) as a nation. Musical theatre has helped define our status in many of the characteristic national challenges mentioned above, from war to race to economics. These are the angles that I'm interested in exploring with students: How do American musicals show who we are, and who we want to be?”

Loyola is so lucky to have Mr. O’Quinn back to share his wealth of knowledge with our students!