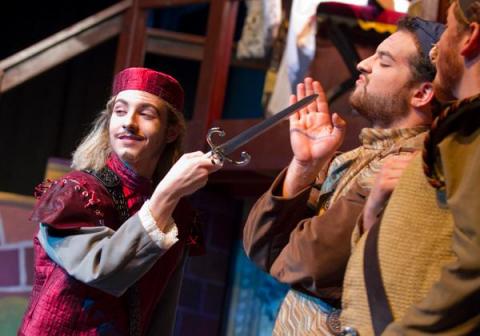 As Loyola students are wrapping up rehearsal schedules and closing scripts, the stage lights are brightening and the shuffling backstage commences.

“All’s Well That Ends Well,” opening March 16, is one of the theater department’s featured performances in the Montage Fine and Performing Arts Series that is put on by the College of Music and Fine Arts.

Loyola’s take on “All’s Well That Ends Well” is not your typical Shakespearean play, for it encompasses a modern twist.

Artemis Preeshl, director and theater arts professor, said she is excited to see this approach to a Shakespearean production take center stage.

“We are taking an approach that involves the 14th century and a contemporary look,” Preeshl said. “The idea is that this play is postmodern. The way the play ends is not a happy resolution that is all tied up in a bow. It ends conditionally. There is something about it that leaves it up in the air.”

Sam Morel, theater arts sophomore, is playing the Clown in the show. He agrees that “All’s Well That Ends Well” has taken a strong and innovative turn.

“It’s definitely a really funny show and quite a racy one too,” he said. “Audiences today tend to think of Shakespeare plays as either really dramatic or just dull classics, but Shakespeare was really a genius at comedy and being edgy in a pretty clever way.” Tian Covington, a theater arts and mass communications sophomore, said she definitely sees the show being appealing for the audience.

“I think the set will be the most engaging. I feel like it will be very interesting to see how the cast works the set,” Covington said.