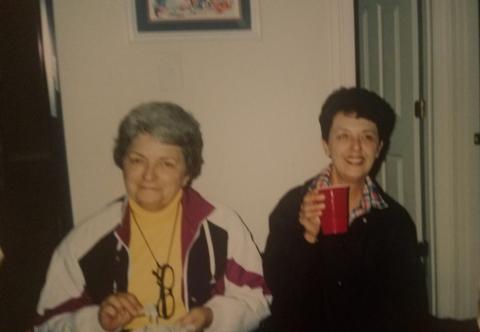 The family of the late Sue Locke gifted Kaci Thomassie and the Loyola Department of Theatre Arts and Dance Costume Studio with vintage supplies at the beginning of the semester. Locke, who recently passed away, lived in the same neighborhood as Thomassie when she was growing up and was friends with her mother. “I remember going over to her house,” said Thomassie. “She would have monthly crafting lessons and the ladies would make things that were very 90s, like little angel ornaments out of pinecones.”

Locke’s daughter does not craft and was in charge of handling her mother’s estate. After chatting with Thomassie’s mother, she decided to donate her mother’s old crafting items to Thomassie and the Costume Studio. The donations included two embroidery machines and a serger. “These are very expensive machines. Now we have the ability to do monogram embroidery and a blind hem, which we usually do by hand, but now having a machine saves time,” said Thomassie.

Thomassie noted that women of that generation took great care of their things. Among the donations were vintage belt buckles, thread, and various seamstress tools that even Thomassie is having to do some research to learn what they do. All these items were in excellent condition.

The donations meant a lot to Thomassie. “I grew up crafting with her, so I feel connected to the spirit of it all,” said Thomassie of Locke. “We’d nerd out about sewing machine stuff.”