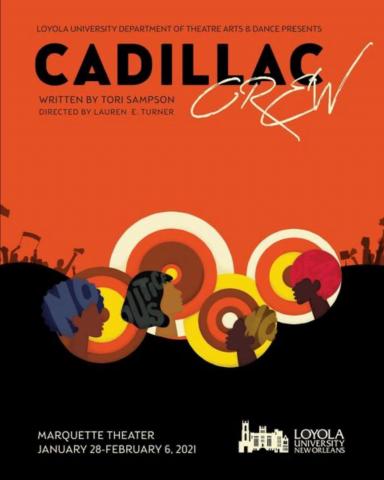 Cadillac Crew, directed by Lauren Turner, opened last weekend with three nights of sold out, socially distanced audiences. The show was originally slated to open in November of 2020, but was pushed back “due to the unusual number of hurricanes and obstacles encountered this semester,” according to Sal Mannino, the Department of Theatre Arts & Dance’s Artistic Director. Despite the setbacks, Turner said she never lost sight of how lucky they all are to be working on a production during COVID.

Lauren Turner is the producing Artistic Director of No Dream Deferred NOLA, a New Orleans-based theatre company that “strives to be an artistic home to theatre-makers of color,” according to its website. Turner said she cried the first time she read Cadillac Crew, a play following four women pioneering the Civil Rights Movement in the 1960s. “The story of Black Women's dedication to the various movements of our lives and our subsequent erasure from history is my story, it's my mother's story, my grandmother's story,” she said.

Turner believes Cadillac Crew is an important piece to be producing now because the story of black women pioneering social justice movements is still happening now. “It's important to remember that we have always been here, always engaged, always fighting for justice and it remains important for us all to take an equal role in protecting and sharing that narrative,” she said.

Now that Cadillac Crew has opened, audiences have gotten the opportunity to experience this story of the resilience and impact of black women in the Civil Rights movement. “I hope audiences walk away from this production, understanding the role that a singular historical narrative plays in perpetuating injustice,” said Turner. To turn the tide to justice, Turner believes we need more spaces that allow the multiple histories of America to be told. “We need to gain a willingness to seek truth in our self-awareness as a country so that we can move boldly and surely towards a more perfect union.”