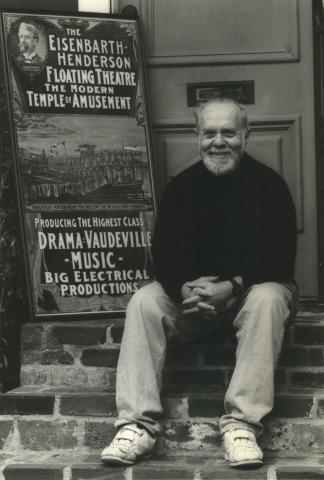 Don Brady, a Loyola University drama professor who directed more than 50 plays, ranging from the classics to a production based on students’ encounters with homeless people, died Saturday (Feb. 23) of complications of cancer at Chateau de Notre Dame. He was 85.

“He was always pointing to his head saying, ‘I’m thinking, I’m thinking,’” said Linda Cook, an actress and longtime friend. “His last words were that he was going into the mind of God.”

Mr. Brady, who was introduced to show business by the family of the actor Guy Kibbee while in the Air Force in Texas, “believed in helping people,” Cook said. “He wanted to bring to light the social issues … through directing or writing a play.”

Perhaps the most dramatic example of this concern was “Ain’t Nothin’ But a Thing,” a 1993 Loyola production based on what students found on the streets and in shelters and emergency rooms.

“They didn’t want to do just another play,” Mr. Brady said at the time in a Times-Picayune interview. “They wanted to do something original, something with some relevance.”

“We found a lot of pain,” said Robert “Imani” Cooper, one of the students, in the newspaper interview.

In discussing the play, Georgia Gresham, co-chair of Loyola’s drama department, left no doubt in a Times-Picayune interview about how she felt about the production and the man who inspired it. "I am in awe of Don Brady,” she said. "He organized this octopus and kept it sane and creative. It's been a wonderful project, especially for the students who are discovering the joy and pain of creativity.”

In addition to possessing a strong social conscience, Mr. Brady had a sly wit.

In a 2004 Times-Picayune interview, the playwright Dan Godoy recalled bringing his first play to Mr. Brady when he was a Loyola student.

“It was about the size of Alaska,” Godoy said. “Two weeks later, he handed me back some pages the size of a travel brochure. He just smiled that glorious smile of his, winked and said, ‘Less is more!’”

Mr. Brady also was a busy performer, appearing in about 40 commercials and 30 movies. Among his motion-picture credits were “The Autobiography of Miss Jane Pittman,” “The Dallas Buyers Club,” “In the Heat of the Night,” “Pretty Baby,” “Cat People,” “Angel Heart,” the 1996 remake of “Lolita,” “Mandingo,” “99 Homes,” “A Love Song for Bobby Long” and “Waiting.”

“Waiting,” a 2005 comedy about the off-the-wall antics of restaurant employees, has developed a local following among cooks and servers, said Cook and David Cuthbert, a former theater writer for The Times-Picayune.

Because of a scene Mr. Brady had with star Ryan Reynolds, cooks would venture out of the kitchen to catch a glimpse of Mr. Brady, Cook and Cuthbert said, and servers would ask if he was, indeed, the actor whose role was described in IMDb.com, the online movie database, as “Old Man.”

“People recognize him to this day,” Cook said.

This acclaim was a sharp contrast to his early life. Born on May 20, 1933, in the New York City borough of Brooklyn, Mr. Brady suffered an abusive childhood that, Cook said, included two years in an orphanage.

Consequently, she said, Mr. Brady couldn’t wait to escape, so he joined the Air Force and was sent to Korea, where, she said, he first dabbled in theatrical productions for fellow service members.

From there, he was stationed in El Paso, where he fell under the influence of Guy Kibbee’s family. Kibbee, who appeared in such cinematic classics as “42nd Street,” “Mr. Smith Goes to Washington,” “Footlight Parade,” “Captain January” and “Captain Blood,” came from a family that had worked on Mississippi River showboats and operated a theater in the West Texas city where Mr. Brady worked.

The Kibbees stoked Mr. Brady’s interest in theater, and he graduated with a degree in that subject from Texas Western University (now the University of Texas at El Paso).

He got a scholarship to Tulane, where he earned a master’s degree in theater history and criticism and a doctorate in American theater history. He joined the Loyola faculty in 1964 and taught there until his retirement in 2007.

In addition to teaching and performing, Mr. Brady wrote dramas such as “Abraham” for the Loyola Institute of Ministry, a translation of “Lysistrata,” “Goldfish Ritual” and “A Quartet of Regrets,” which was in a Contemporary Arts Center competition. The playwright Terrence McNally, who judged it, praised “Quartet” as the work of a “unique voice” in American theater.

Mr. Brady also worked with handicapped performers and organizations to fight homelessness and drug addiction. “He was always trying to make the world better,” Cook said.

He received the Big Easy Lifetime Achievement Award in 2007.

Though Mr. Brady retired 12 years ago, his creativity never stopped. In his last days, Cook said, Mr. Brady was reciting and creating poetry, as well as a piece about the worldview of a rabbit in a magician’s hat.

In a Loyola interview, Mr. Brady had a simple explanation for his diverse, voluminous output: “I daydream all the time.”

There are no survivors.

His body was donated to science.

A memorial service will be held at a later date.