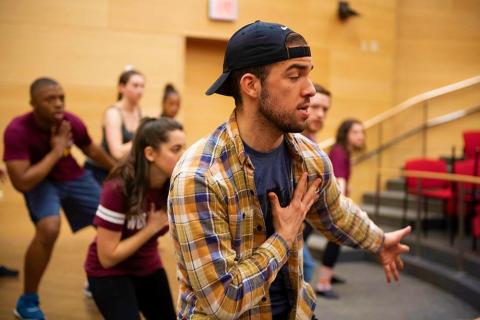 The musical Hamilton, with its revolutionary style of hip hop, R&B, pop, soul, and classic show tunes, has been taking the world by storm since 2015 and is now sweeping the nation. The 2019 tour of Hamilton has recently come to the Saenger Theatre in New Orleans, drawing audiences both old and young. On Tuesday, March 19th, Phil Colgan, dance captain and swing for the touring cast of Hamilton, visited Loyola’s campus to teach a master class.

The students hummed with excitement as they sat anxiously in the seats of Nunemaker Auditorium for the class to begin. The chatter was enthusiastic as some were excited to watch and ask questions while others couldn’t wait to dance. Although people from all majors were invited, the crowd was dominated by theatre people. As Phil Colgan introduced himself, there was an almost comical response from the audience: immediate silence followed by enthusiastic and polite hellos. After getting super hungry over discussing favorite breakfast foods, it was time to take to the stage.

He led a quick warm up and began to teach us the choreography for the song “My Shot.” He created a comfortable and fun atmosphere by allowing people who don’t necessarily dance to just have fun. However, there was more to be learned about that number than the dance moves. In the story, it’s the first time in the show where the ensemble unites as one force with one cause. Colgan spoke about how this is shown in the dancing, how each choreographed move is insanely intentional with a purpose behind it and how having moments of emotion and tension in your movements can add so much power to a number. He told us he’d rather see us have that moment of wishing for something and forget the next five steps, then get everything right and have concentration face.

Soon, time for dancing came to an end and we returned to our seats for the Q&A. Questions were asked about his journey through the world of theatre, how he booked the Hamilton tour, what it was like working on something like that, and things he does to help himself stay on top of things. There was a moment as Colgan talked about actually being in Hamilton, where it was very clear that he works himself night and day for a reason. He spoke fervently about how the show meant so much to people and how it’s crossed boundaries and reached so many audiences. He spoke of how happy it makes him to see little Alexander Hamiltons and Schuyler Sisters leaving the theatre with bright, wide smiles.

For the rest of the day, all anyone could do was sing the song or practice the dance in small groups throughout campus. That Thursday, in the Musical Theatre Performance class, Patrick Gendusa, who had organized the master class, smiled and held up his phone with a, “Do you wanna show the class the dance from Hamilton?” Excited shouts and cheers were the answer, and four of us got up to attempt the dance yet again. We all at least forgot one step or just messed up, but when it was finished, we laughed together as the class clapped and cheered for us.

Most don’t realize it, but there is so much more to dancing than the right moves. It’s about the emotion being so high that you have to move, about making everything intention clear and strong. Phil Colgan brought that point to light during the master class, speaking about how the best dancers are the best actors and the best actors are the best dancers. It’s those moments that make you hold your breath and pulse with excitement and energy, the moments where you can connect with the music and the movements, and the moments where you can come offstage, smiling and laughing, proud of the work you’ve done.