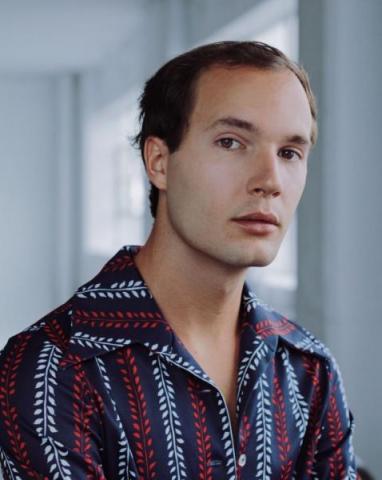 Evan Daigle who plays “Toby” on TNT’s hit original series “CLAWS” opens up about his life, journey, and experiences that lead him to be an actor who’s star is currently on the rise. Find the full article here.

Young Blvd: Congratulations on becoming a regular cast member on “Claws” How did you celebrate this!?

Evan: Thanks so much! I got a call from my team that I’d been promoted and we all cheered together over the phone. The next day I went on an all day hike by myself to think about this next chapter in my life. I love being alone in nature, so it was the perfect way for me to celebrate.

Tell me about what makes this show “Claws” so good, and how did you come upon this role as Toby?

I think what makes “Claws” so good is the amount of diversity on the show. We have characters of all kinds of shades and backgrounds. We also have such a stellar ensemble cast that really lights up the screen. It really all starts with the writers though. They keep the show fresh and moving along. I was auditioning for small parts locally in New Orleans where “Claws” is shot. I was also going to college studying acting. I got the audition for “Claws”, which was originally a non-speaking, one scene part. I got the part and it turned into a recurring role for the first two seasons of the show and it became a regular part in the third season.

What’s the set like behind the scenes on “Claws”?

The set is fun! It’s usually a little hectic. That’s just the nature of making TV. We have a lot of fun though. It’s cool because in “Claws” we get to play light and fun scenes and also do really emotional work. We like to talk and cut up a little while we’re filming the lighter stuff and we give each other space and respect when have heavier scenes to film.

Who inspires you as an actor and creative?

I get a lot of inspiration from great actors. I have my favorites like Jessica Chastain, Paul Dano and Nicole Kidman but I’m really such a fan of so many actors. It inspires me to see someone do so well with a part that they strike a universal emotional theme that touches the viewer. It’s incredibly inspiring to have an emotional reaction to an actor having a true emotional experience on screen or on stage. These kinds of performances inspire me to keep training my acting skills and keep working really hard to move past being a good actor and one day be a great actor. I really value continued practice and training in acting, so I tend to look up to actors who have a strong base in formal theatre training.

You grew up in a small town in Louisiana, what drew you to Hollywood and acting?

I don’t have a single concrete answer for that. I’m honestly not entirely sure why I’m so drawn to it. My reasons for acting and for pursing a career in Hollywood change as often as I change. Growing up in Louisiana, even though I had the desire to act, I had no idea how to start. It wasn’t until I was in college when I truly first started. I think the thought of having a life where I would be working on new projects all the time, that I wouldn’t have to sit at a desk, that I would be able to meet and work with cool people, these kinds of superficial outsider-ideas about what being an actor was, is what originally drew me to it. It wasn’t until I actually began taking acting lessons, that I realized why I love it. I love doing it. I love the acting itself. The more I fell in love with the process of building a character and performing, the less I cared about all the other aspects of what being an actor is. The more I focus on my craft, the more success I’ve gotten in the business.

If you could give one great piece of advice to your younger self, what would it be?

To try not to be so afraid of the future. I grew up being really scared of getting older because I felt like I had no idea what I wanted to “do” with my life. I would tell myself to relax and trust that working hard and loving art will foster good things to come.

What passions and hobbies do you have outside of acting?

I grew up painting and drawing. I thought for a long time that I wanted to be a professional oil painter. I went to art college right out of high school for two semesters before transferring to a different college to study acting. Although I’m not pursuing visual art professionally right now, I love working on my art work in between acting jobs. I also really love hiking and spending time in nature. I love going to dinner with friends.

Shoutout- who would you like to tell for the first time how important and vital they were to your personal success?

I hope this isn’t the first time I’ve told her, but my aunt Jacie Daigle has been extremely important to my success. We are pretty close in age, so we had more of a brother/sister relationship than a nephew/aunt relationship. If I have any coolness in me it’s because of her. She introduced me to music, art, movies, gay people…  Without her or I realizing it, she was preparing me for a life as an artist just by being herself and sharing her creative side with me from such a young age. I never would of had the confidence to be an artist if it was’t for her.

What advice would you give to youth scared to make the leap of going after their dreams?

Realize that the cliches of life are usually the truths of life. You only live once. Don’t take yourself too seriously. Have fun while you can. We’re all going to die anyway. Follow your dreams. For me all of these reasons are reason enough not to waste the little bit of earthly existence we have, doing something that doesn’t make you happy and fulfilled. I believe all we have is the here and now, this life. So I say make it as fun for yourself as possible.