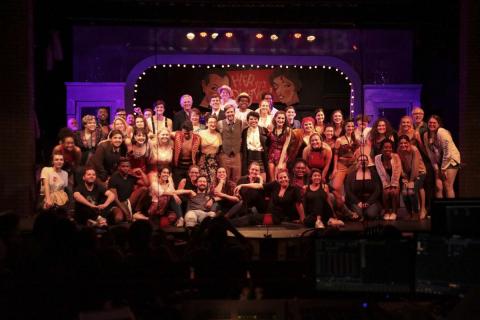 The lyrics of Kander and Ebb's Cabaret seem especially poignant as the nation confronts the coronavirus crisis.

"What good is sitting alone in your room?" lead character Sally Bowles sings, before she beckons, "Come to the cabaret!"

Before audiences could respond, the Loyola Theatre production was closed.

Since January, students had been rehearsing under the direction of Bryan Batt and Tom Cianfichi, with musical direction by Florence Presti and choreography by Jaune Buisson.

The show takes place in Berlin in the early 1930s as the Third Reich is coming to power. Much of the action involves the Kit Kat Klub and the English singer Bowles.

The canceled performances were slated for the stage March 20-28, but with coronavirus still a distant threat, students performed a dress rehearsal to a full house, including university President Tania Tetlow, College of Music and Media Dean Kern Maass, Interim Provost Maria Calzada and a host of parents, friends, and students.

Cristian Orellana, a Loyola journalism major and photographer for The Maroon student newspaper, shared his photos of the production.