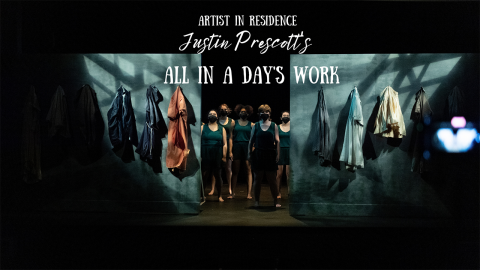 All in a Day’s Work; original work devised by director and company

All in a Day’s Work is a movement-based theatrical experience that strives to ground us in our most common human experiences, regardless of specific events, to drive us toward empathy and understanding for one another.

The work is a dance theater composition developed by its company of actors and director Justin Prescott. Inspired by parallels in historic and current events like the Great Depression and the COVID-19 pandemic, All in a Day’s Work asks questions about the American Dream, examines the emotional impact of processing trauma and grief, and analyzes the differences between “what” and “who” we are. Through this exploration, the space is filled with a sense of timelessness and connection, as well as compassion for the individual person and the collective of humanity.

What are the project’s current development/performance goals?

The project’s current goals are to use dance and movement to emulate its intended themes (timelessness, universalism, love and empathy in the face of adversity, etc.). This culminates into a dramatic presentation relatively free of a traditional format and instead forms physical images and movement sections with distinct, differing emotional intentions. In development, there was no goal regarding the length of this production; creative emphasis was placed on making meaningful art, not on meeting a perceived time requirement. As a result, the production has a run time of about fifteen minutes, followed by a 15 minute talkback with the directors, company, audience, and TAD artistic director, Sal Mannino. While there is endless potential to add, adapt, and evolve the content, the project eventually concluded its development for tech and dress rehearsals in the first week of November, with a preview on Wednesday the tenth and opening night on Thursday the eleventh.

How does this project contribute to the overall mission and goals of the university and/or the Department of Theatre Arts and Dance?

The Loyola University New Orleans Department of Theatre Arts and Dance is committed to process-based artistic engagement rather than product-driven learning. Instead of aiming for the perfect opening night performance as an end goal, students gain the most crucial knowledge and insight into the exploration of theatre in and out of the rehearsal room. Since the process never truly ends, this also means that there is rarely, if ever, a definitive “right” or “wrong” way to conceive dramatic art. All in a Day’s Work directly reflects these values in its collaborative development both on and off the stage, between its directors and actors with the support of the designers and production team.

The work also succeeds in expressing many Jesuit values such as internal and external reflection, solidarity and kinship, and constructing a contemplative vision of the world formed by justice, hope, and love. The themes presented can be concisely articulated by the Latin phrase “cura personalis,” or “care for the entire person.” Linked to this Ignatian concept, the piece demonstrates meaningful considerations for the mind, body, and spirit of oneself and one another.

Overall, All in a Day’s Work encourages an instinctive, devised process, and the material created from that process absolutely furthers the missions and goals of the department and university.

What (if any) are the project’s future goals? (continued development, external performances, touring, etc.)

No known future goals exist for this project at the moment, but there is potential for continued development if the opportunity presents itself.

Thanks to all advisors, as well as costume shop supervisor Baylee Robertson, for their supervision of the project and contributions/advice given to design team leads. Special thanks go to Duncan Becker for sound design contributions and Sal Maninno for graphic design contributions. Thanks to social media and marketing manager Arianna D’Antonio for all of her hard work as well.

Find the production’s program at this link: