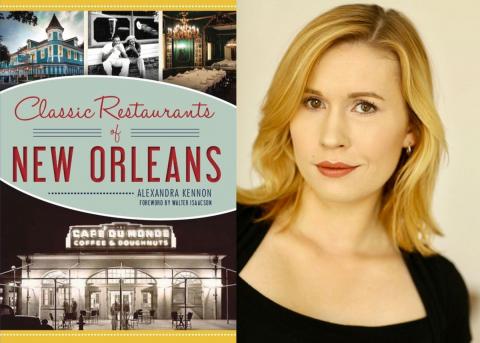 There’s a young lady standing at the intersection of journalism and theatre, and she’s got a key to some of New Orleans’ most venerable kitchens. Alexandra Kennon, St. Francisville native, actress, writer, tour guide, and Country Roads contributor, will release her first book on November 4. Classic Restaurants of New Orleans (History Press) delves into the histories of restaurants most embedded in Crescent City culture and emerges with a portrait of the country’s best food city that will compel newcomers and aficionados alike. “I wanted to not only pick the oldest restaurants,” said Kennon, “but also the ones with a rich family history.”

The roux-spattered archives of Antoine’s, Arnaud’s, Parkway Bakery and Tavern, and other heavyweights are crammed with anecdotes, not to mention recipes, but that’s where Kennon’s highly unusual CV comes in. The editor/entertainer sifts through a century and a half of culinary histories to craft a compelling narrative rife with colorful traditions.

Regulars at Antoine’s who came to dine during Prohibition received an innocuous-looking coffee cup containing a key that could be used to open a hidden door at the back of the ladies’ washroom to reveal a full bar in what was at the time the carriage house. The guest would fill their coffee cup with their liquor of choice, and if other diners questioned where they obtained the illegal spirit, they were to reply, “It is a mystery to me.”

Just as valuable are her expansive conversations with owners, chefs, bartenders, and oyster shuckers alike as they tote weighty reputations and make delicate changes with another century of success in mind. “In many places, chefs can carry the burden of a restaurant and its menu,” said Kennon, “but in New Orleans it’s really a mix of chefs and owners carrying on family legacies. You don’t go into a role as fifth generation owner of a family business without being passionate. They feel an obligation—and were honest about that. But there was always passion.”

One bittersweet thrill of the book is a well-timed interview with Chef Leah Chase, conducted in April 2019 (Chase would pass away two months later, in June). The chef-owner of Dooky Chase’s speaks with her signature verve about her rise through the restaurant scene, from farm girl, to French Quarter waitress, to young woman intent on improving her in-laws’ restaurant, to grande dame. Kennon wisely includes the interview’s full transcript at the close of the chapter, and it’s Chase’s perspective that underscores the port city’s ability to be traditional and tempestuous at once: “They look at southerners as if we’re dumb, we don’t know anything,” Chase told Kennon. “But look at us a second time. We moving. We moving. Because we have a great love for people, we learn to live with one another, we learn to work together—that is important.”