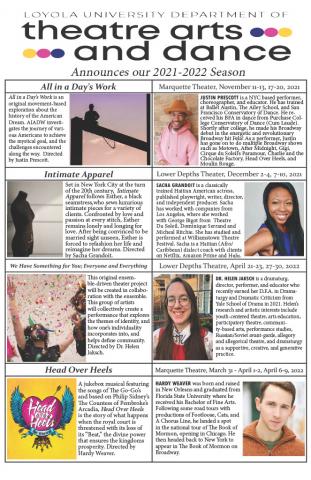 Broadway is Back – and so is Loyola Theatre! Loyola’s Theatre and Dance Department is in full swing preparing for the theatre season, with four major productions to be held on campus, directed by working professional artists, including faculty member Justin Prescott, who recently performed in the Tony Awards, the fabulous Sacha Grandoit, Helen Jaksch and Hardy Weaver, who performed in Book of Mormon on Broadway.

“As a department, we are moving away from simply doing shows - and toward creating theatre and cultivating artists,” said C. Patrick Gendusa, chair of the Loyola’s award-winning Theatre and Dance Department. “We are thrilled to welcome these incredibly talented directors to share their gifts with our students and we are especially excited to finally bring Head Over Heels to New Orleans, in the show’s New Orleans premiere.”

All in a Day's Work

Created and Directed by Justin Prescott

All in a Day’s Work is an original movement-based exploration about the history of the American Dream. Directed by Broadway performer, Justin Prescott, AIADW investigates the journey of various Americans to achieve the mystical goal, and the challenges encountered along the way.

Set in New York City at the turn of the 20th century, Intimate Apparel follows Esther, a black seamstress,who sews luxurious intimate pieces for a variety of clients. Confronted by love and passion at every stitch, Esther remains lonely and longing for love. After being convinced to be married sight unseen, Esther is forced to refashion her life and reimagine her dreams.

By Jeff  Whitty, featuring music by the Go-Go’s

A jukebox musical featuring the songs of The Go-Go’s and based on Philip Sidney’s The Countess of Pembroke’s Arcadia, Head Over Heels is the story of what happens when the royal court is threatened with the loss of its “Beat,” the divine power that ensures the kingdom’s prosperity.

Directed by Helen Jaksch & Devised by the Company

This original ensemble-driven theater project will be directed by Helen Jaksch, and created in collaboration with the ensemble. This group of artists will collectively create a performance that explores the themes of identity, and how one’s individuality incorporates into, and helps define community.

Group Rates Available for all Productions